Why the simplicity on this important issue? Watching the recent news story coverage of RBS and Brexit I felt that most journalists got it wrong. In simplistically reporting this as a short-term item, they seriously missed the point. I voted  remain and will do so again if we get a second chance to do so.  However, that said, my decision is not based on unswerving 100% loyalty and support of everything the the EU does and imposes on member countries.  Peaceful debate is always preferable to war, that was my prime reason for being pro-remain, and why I hope the necessary leaving legislation is never activated. It did not, and does not, mean I automatically accept as correct all the outcomes of EU mandates.

I have some support for the Brexiteers position that too much in the EU system is centralised and this area is one of them. I have always hoped that parties of the left would unite politically through the EU and stop the unswerving drift to neo-liberalist policies.  This desire to sell off state assets is one of them. I have not transferred my account to RBS for two reasons, no local branches, and they were always going to be sold back to the private sector.

A state bank would be good

As a socialist I don’t like much that my current bank stands for in regard to underlying ethics. I do want to bank with a state owned, solidly constructed fiscal entity that offers traditional, simple banking. It is too simplistic to blame the change and banking crisis solely on  building design chages, from solid and classical to modernistic light and airy, but this represented the attitudes at the top. Solid and dependable became light and risky, then collapse.

The dilemma the journalists missed – the key story

Are we in or are we out? This whole RBS and Brexit question surely is right at the core of what we voted on. Why, after the Brexit vote, does this sale of RBS assets still have to go through? If the EU demand it, well we’re supposed to be leaving them anyway, so why can’t HM Govt simply ignore and challenge the rule. UKIP’s view would be that. Where is the debate on this?

Where is the opposition?

These are British (Ok Scottish) assets. The SNP appear to this Englishman to be too busy deciding if they want to be pro-EU independent, or socialist Scots, to actually fight the true corner of stopping the sale and keeping this bank as a nationalised asset. As a major employer, based in Scotland, run for the benefit of all, bigger the better surely.

UKIP have spent so much time faffing over a new leader they have missed the boat on using stopping this sale as an example of defying Europe – but then are they just narrow minded, pro-capitalist Tories in disguise?

Labour, as for UKIP, too busy destroying the party with internal politics to actually fight for the retention of what is already partially nationalised, whilst at the same having airy fairy dreams of more nationalisation; which the electorate isn’t yet ready for as it has not seen an example of something profitable being state owned – RBS run as a stable, bank would give that option.

What a farce and perhaps an other example, despite what the establishment (I.e Tory supporting) claim, of the embedding of a right wing, everything capitalism wants is good, editorial ethos within most of our leading media outlets. 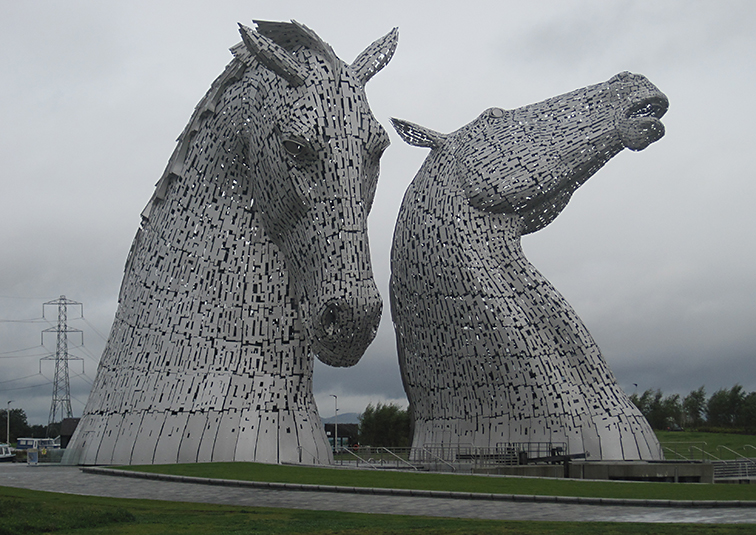 A general status update as it has been a while since I posted anything here so time to get back onto the blogging trail. It has been busy summer including helping both my daughters make family house moves, two brief holiday breaks, one in the Lake District and a second in Scotland together with presenting and writing a conference paper. In Scotland we saw the amazing, award winning, Kelpie statues at Falkirk.

The conference was an excellent event held in Newcastle, with the cradle of early railways being Tyneside and adjacent areas a most appropriate venue. My own paper was on Why Replace the Horse? The subsequent write up stretching over the summer; now awaiting the peer review, and hopefully, acceptance for the ultimately published proceedings book.

Working full-time at home this week on web updates and management committee reports in my role as PRO for the Stephenson Locomotive Society (SLS) but definitely missing the anticipation of a further year at Uni. After several short courses on IT and Graphics at Kingston Maurward College, and then three years at Bournemouth University, it seems very strange not to be getting new books etc., and anticipating the new modules. I have plenty of on-going research in hand, to say nothing of the website rebuilding and writing to be done, plus attacking the Autumn tasks of the garden, so I won’t be short of tasks, that is for sure.

As for today a fight with the blog software; this would have been posted yesterday if the part of the package needed for adding new posts hadn’t been corrupted.  I still have to fix the Instagram links and plug ins as isolating that has fixed the editing and updating processes.  Why can’t IT stuff just work?!