Several of the sites linked to externally, including my own gallery of images on the original fotopic host, , have disappeared in the years since this project was undertaken in 2007. Additionally the coach has also suffered from the damp whilst in storage and a second, replacement, version will need to be built in due course. There are also some design tweaks that could be made to improve the model if that scenario occurs. (last update 24 April 2017)

The original article, with some amended links etc. 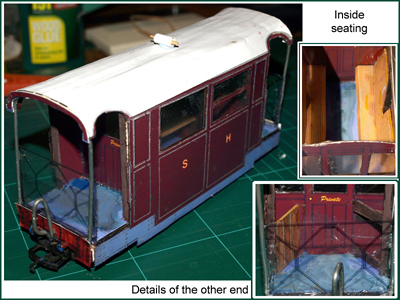 Unitil the 1990s I had been an active railway modeller in 4mm OO but during the '90's that ended due to lack of space in combination with the price and, for me, difficulty in building etched brass kits. In the Autumn of 2007 following a quadruple heart bypass operation I looked again at a model railways to do something small for a recuperation project. I found the, then extant, Gn15 info site, the Gnatterbox Gn15 forum,and the Tom Waits $29 challenge (topic since deleted). For any reader not aware Gn15 is modelling railways of roughly 15in gauge in G scale (1:24 = half inch to the foot) to run on the common 16.5 mm track gauge (OO/HO). Coincidentally other factors also inspired a return to my hobby roots and card modelling, hence building a predominantly card model for the Tom Waits contest despite the concurrent challenges the larger, and new to me, scale would offer.

So the first question was could I meet the challenge that had been set of building a Gn15 item for under $29 US, or roughly £15.00 to £16.00 at the relevant exchange rate, in a short time frame.  My time was short solely as I did not find details of the challenge until well after it had originally been set.!  The only suitable drawings I had available were the Narrow Gauge Railway Society set covering the Sand Hutton Light Railway's rolling stock.  The Sand Hutton was a real railway built to the east of York.  However, I felt the real S H coach was too large to tackle. I therefore adapted the design to provide the line’s owner, Sir Robert Walker, with an entirely fictional private coach. I was also able to get the design to fit onto an old OO bogie wagon from my stock box thereby providing structural stability to the under frame.

As far as the model is concerned I feel it has answered my objective by proving that I can produce a self-design "scratch builder's aid" style kit using photo print card plus other plain card backing. Using photo mounting board strip provides framing like the proto-type. The roof was also built as the real thing would have been with longitudinal strips of photo-mounting board. Ideally it needs one, possibly two, more overlays of card as the prototype has the canvas overlying the wood strips.

The deadline approached all too soon for the Tom Waits challenge entry deadline hence the unfinished vac pipes, temporary air vent , temporary buffer beams and the original small Tri-ang buffers not yet replaced.  Also I messed up the ends a bit as by the time I realised, that the right way to do the end stanchions was to use metal rods un-bent from a metal coat hanger, it was too late to make a bending jig and I had to do it free-hand!

Did I meet the deadline and the $29 limit? Yes to both. The Weltrol wagon was from my bits box and is probably over 30 years old.  The only items specifically bought for it were some strips of balsa wood. (£1.25 UK) Say £5 to £10 above that for other materials, paint, glues etc already in stock so well inside the approximate£15 / $29 limit.  It is therefore entirely practical to make something satisfying without bankruptcy!

Overall the project met my objectives for the recuperation project, proved I like the scale gauge combination and that card is practical in this size. The identified down side is the photo paper coating is easily damaged in the build process and will also need a coat of spray fixer before final release to a layout. Build two will follow, taking account of the many lessons learnt on build number one.  The first build of this coach was fully documented/illustrated as a "how I did it" photo blog. (Replaces the lost fotopic album).